It’s the last night before racing begins for the 2014 World Championships.  We have been at our hotel in Amsterdam for a full week now and have been patiently whiling away hours in between bus rides and rowing sessions in order to get to tomorrow.  Before that, we logged hours and countless kilometers on the water and the rowing machine in order to earn the privilege of racing against the top rowing athletes in the world.  This is it.  All the times we wished we had an afternoon or a morning off; that we wished the week was one day shorter; that the row or erg session was a few less K; have led to this past week of us being bored, restless and feeling antsy and fat.

During the last week leading up to racing at our main regatta for the season is unlike anything else we do throughout the year.  Even our most important selection and racing events, like NSRs and World Cups, do not involve tapering like we do for Worlds (or the Olympics).  A taper is, in theory, a coveted and highly-anticipated element of an endurance athlete’s season.  It’s the time that we drastically reduce the volume/duration of our training sessions in order to let our bodies recover and perform to their “peak” .  All the times we have struggled through long, difficult training sessions two or three times each day during the year have been in an effort to stress our bodies in order to help them become stronger.  But in-season training never really allows for your systems to “catch up” to the stress or damage we are doing to them in order to recover enough to feel great or even “good”.  A taper is designed just for that purpose and its effects are both manifested and felt to varying degrees by different athletes.  Excess energy, restlessness, moodiness, and disruptions in sleep and appetite are all common effects, but no one can always predict exactly who will experience the pros or the cons, and to what intensity.  Ironically, feeling “good” sometimes doesn’t feel that good when you’re so used to feeling “bad” the rest of the year.
I have felt that the longer I have trained, the more benefits I feel from a taper.  My first few years on the Team, particularly in 2008 and 2009, I felt only pain and misery during my taper.  Physically, my body was extremely uncomfortable leading up to and during racing, complete with aches, pains and stiffness.  The race-intensity work that we did right before and during racing at the Games and at Worlds those summers was miserably painful (even if it was fast) to the point that I thought I was some sort of weird athletic outlier that was physically incapable of a successful taper.  It wasn’t until my 2011 Team that I felt that my body was responding appropriately, and that our taper wasn’t something to suffer through, but to use and trust as a training tool.  Things outside of training like mood, sleep and eating will probably always be a little unpleasant but the athletic performance element of the taper has changed immensely for me.

Which means:  I’m ready for racing to start.  In addition to dealing with the physical side effects of a taper, there are other things to consider when you’re approaching a major race, like the fact that you will suddenly have a huge amount of free time during the day during which you are not supposed to be doing anything except sitting or lying still.  There are a lot of things you can do while resting, but the majority of us use it to read, watch movies, surf the internet, or [with increasing frequency on the women’s team] knit.  But, after a certain point, there’s only so many Sudoku boards you want to play, or minutes you can stand staring at your computer screen before you’re ready to do something else.  Anything.  Even (or especially) train.  And the closer you get to racing, the less time other athletes want to spend with you, so we become increasingly isolated by boat or by hotel room with maybe just a pair partner to get you through most of your afternoons.  I’ve occupied a good chunk of my time in Amsterdam so far via various internet distractions (Facebook and Twitter, videos, etc.), knitting a baby sweater and reading Chuck Palahniuk’s Choke.  All of which are great.  But yes.  I’m ready for racing to start.

I can’t tell you anything about what to think or expect for racing at this year’s World Championships because the only word that is truly appropriate for the Bosbaan this August is mercurial. No other race course I have ever been on has demonstrated the rapid and dramatic range of emotions that I have seen here at the Bosbaan over the past several days.  Conditions have varied from perfect to unrowable in the span of 4k of rowing, and we have seen the full range of sun, rain, thunderstorms, gale-force winds, sun + rain at the same time, and then some of each in a single 2k stretch.  It has forced us to be flexible and adaptable in ways that we didn’t expect, but we are learning a lot and staying positive.  I won’t complain about the quality or fairness of the conditions here or anywhere else, because as I told Kerry during one particularly challenging battle into the headwind (with a smile):  “we chose this.”  Rowing the pair this summer was our decision, so that means taking the good with the bad, and not complaining.  In this case, the “bad” would be that windy or crowded days on the lake can be more challenging and time-consuming in the 2- than cruising up and down the lake in the 4X or 8+.  But the good is this: 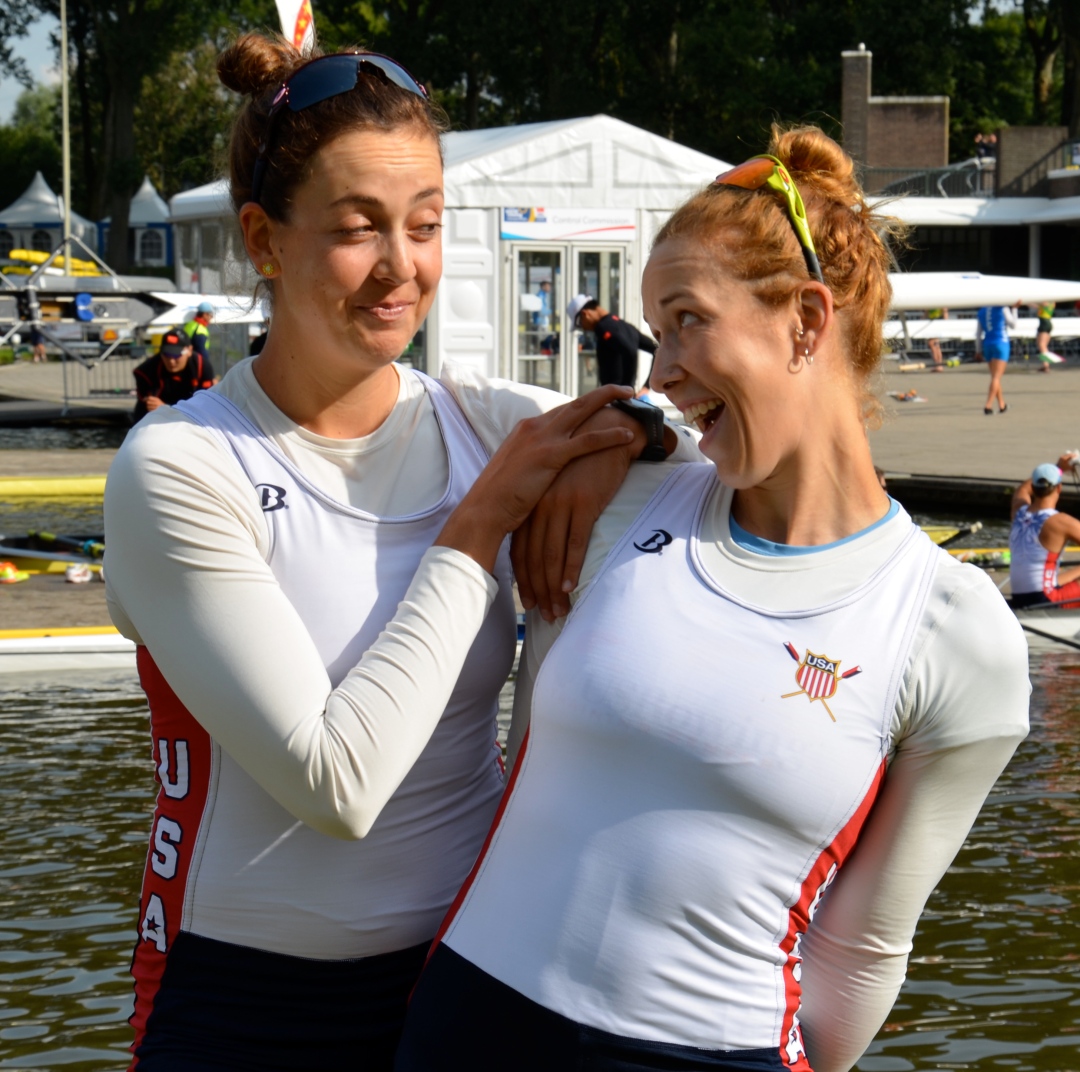 Draws are up for tomorrow’s heats, and we have a great field of competitors to line up with this week.  I am so excited to have this opportunity to try something new, and to try it with Kerry.  We have had a blast training together this summer, and more than anything I want to put together a great week of racing to see what we are capable of and to make our Team proud.

I’ll be posting more here, and on my Facebook page throughout the week.  I’ve already posted a few short, goofy videos there, which you can watch in under 10 minutes:  http://www.facebook.com/MKalmoe

Nothing we aren’t prepared to handle.  Bring it on, Bosbaan.

2 thoughts on “Ready to Launch”