I’ve been back in the US for all of 24 hours now, and I think it’s time that I finally put my 2012 Olympic experience to words.  As much as I wanted to write about it all as it was happening or immediately after racing had finished, I couldn’t.  I wanted to have some more time to let things settle, accumulate, accelerate and sink in while enjoying the rest of London.  I’ve been off or mostly off of my Facebook, blog and Twitter for the past two weeks, and so am just now surfacing and starting to go through everything that has landed in my inbox or on my wall in that time.

I finished Olympic competition on August 1, which gave me just about eleven days to spend celebrating and taking in the rest of the Games.  I had a blast.  I would have loved to have gone to more events, but tickets were very difficult to come by, and with having to request them from the USOC two days in advance, there was almost no way to predict if you would still have an open schedule for an event you requested in two days time.  Most importantly, I got to be a part of the excitement of the Games, meet more fabulous and interesting people from all over the world (including many from the US), and spend some downtime with my teammates after four long years of hard work.  I have some truly great memories from the past two weeks that will stay with me for a lifetime.  So thank you to everyone who was a part of it; London was truly unforgettable.

Racing already seems like it was years ago, but the emotions of the moment are still incredibly fresh.  I can admit that I was a little nervous for the final.  Going in to the warmup, my thoughts were a little scattered and I kept wondering how I was going to get focused at the start line if I couldn’t even stay focused for fifteen or twenty stroke pieces in the warmup.  But once we got up there and got aligned, I figured it out and practice and routine took over.  The last thing I did before being polled was put my hand on Adrienne’s back, and I said, “Let’s make today your first day as an Olympic medallist.”  It was a very powerful moment for both of us.
I don’t remember much from the actual race itself except that we were really close with Germany for the majority of the race until fading in the closing meters.  We raced hard, we pushed together, and we had our best race of the regatta in the final.   With only three weeks to row together, and only two races prior to the Olympic final to prepare us (Olympic heat and Olympic rep), I am happy with how my crew learned and adapted over the course of the regatta to get ourselves up on to the podium.

Crossing the line, there was a moment of shock and disappointment knowing that we had not won gold.  And feeling that we had given away the silver.  But that disappointment faded almost immediately and was replaced with the realization that we had just done something no other US Women’s Quad had ever done: we had won an Olympic medal.  And that’s when the tears started.  After years of training and constantly fighting to make a place for myself and for other sculling athletes at the training center in the shadow of the women’s eight, we had done it.  We had hauled ourselves up on to the podium with a close, gutsy race against some incredibly fast crews.  The sense of pride and also of relief that accompanied those first moments on the other side of the finish line are things I will never forget.  I never cried for missing out on gold or silver.  I only cried because of how much this medal means to me, and to my teammates.  I cried because of how much this medal will mean to the United States women who will come after me.  I cried because of how grateful I was that my coaches never gave up on me, even when I gave them plenty of reasons to.
We came home with Olympic bronze.  We didn’t win Olympic gold. Nor did we win a second consecutive Olympic gold, or a seventh consecutive world or Olympic title.  We weren’t Olympic champions in 2012.  But this bronze medal means everything to me–because there probably isn’t anyone on the US team who has lost as many times as I have. So someone had to be the one change the pattern of success for women scullers in the United States.  Someone had to be stupid enough, stubborn enough, and crazy enough to drag three other people along with her.  Someone had to find a way to open the door for sculling athletes who will come along later.  That that someone might perhaps have ever been me at any point  is a huge honor and I am so very happy to have been a part of this.  I would not trade this experience for anything.

Thank yous are in order for just about everyone.  But especially:

Finally, I haven’t had the right time to share this but I thought it was an appropriate addition to this post.  This is a letter that I [begrudgingly] wrote to myself in January of 2012 during the USOC Olympic Ambassador Program.  At the time, I resisted writing it because superstition prevents any of us from getting too far ahead of ourselves at any point in the selection process, and January was lightyears away from the naming of the Olympic Team.  Still, I wrote it anyway, sealed it, and forgot about it.  The letter was waiting for me in the Olympic Village when we arrived in London, but I didn’t open it until the night before my Final.  I took it with me to the course the next morning and read it before we launched.

If you’ve ever doubted yourself, don’t. 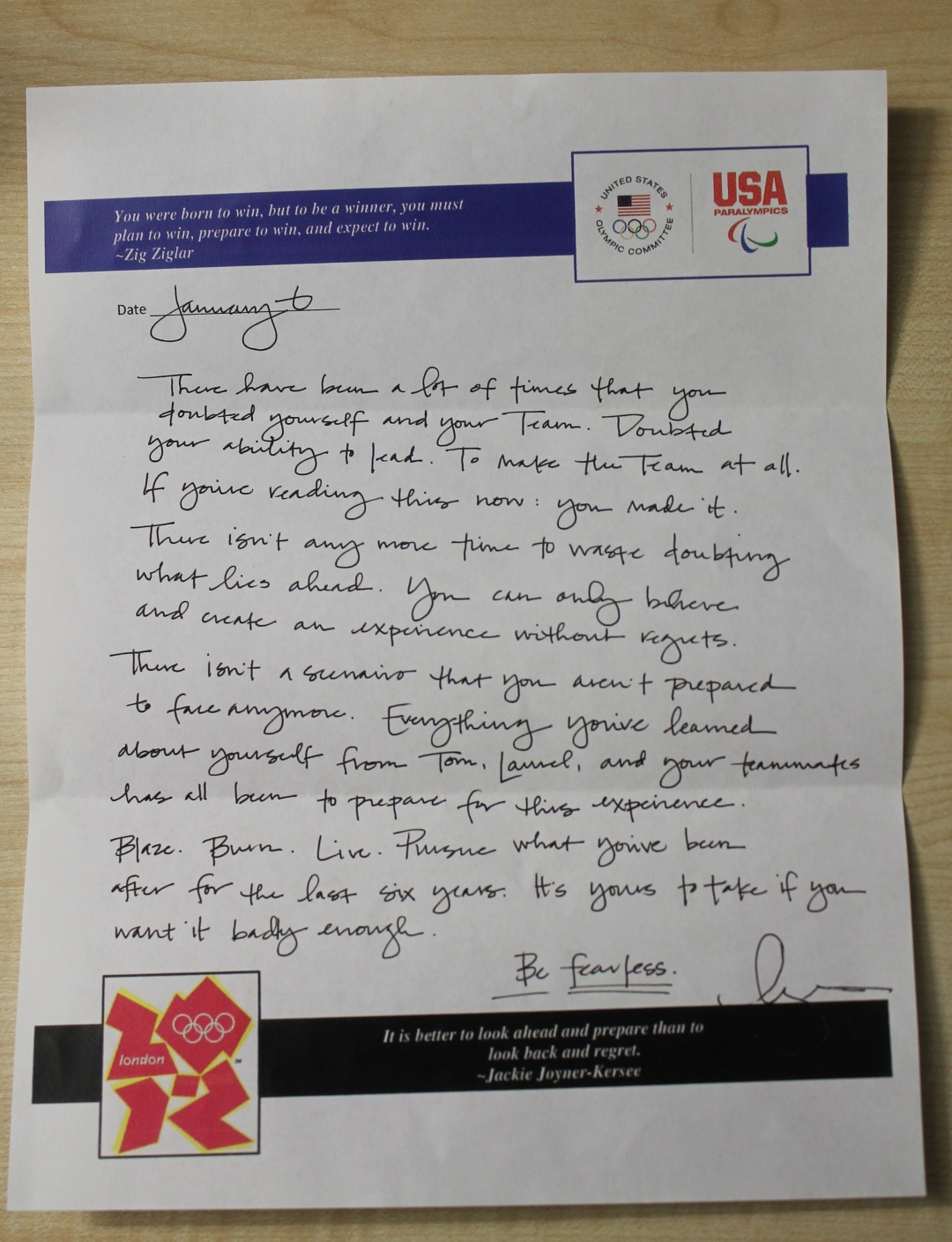 I do want to call credit to the great women of the 1984 US Crew who won silver in the coxed quad at the Games in Los Angeles.  But since the event has gone from W4X+ to W4X and the race has been extended from 1k to 2k, the US has been unable to medal the quad at any Olympic Games until now.