It is awesome to be back at Henley!  I knew when I left in 2009 after a very disappointing go in the single that I wanted to come back and race again–and here we are two years later.  This trip I’ve brought along a large number of my teammates from the US Training Center.  We are racing an 8+ and two 4Xs this weekend (no 1X this time, thankfully!).  Traveling in a large group has been a lot of fun during the Henley experience, as there are so many more of us with whom share the sights and sounds of this lively regatta.
It is, as ever, a spectacle of magnificent and mortifying fashion choices; as well as a gladiatorial endeavor on the water where fortuna fortes iuvat.  An enormous high-five to our bow woman, Stesha Carle, who has kept our crew and our equipment safe through a number of close encounters with boats both bigger and faster than ourselves.  After some consideration, I have come to the conclusion that rowing bow in a quad at Henley is quite possibly the most difficult seat at the regatta (at least until you pull on to the course) as you are responsible for steering the biggest and fastest of the blind boats on the river.  One wrong move and a full-pressure quad could do some serious damage to another boat.  I remember that navigating a pitifully slow 1X was enough of a challenge for me–going quad speed while steering the Thames is something I’m happy to leave off my life-list.  So to all the 4X bow seats out there, good job and good luck.
The USA men are also here in spades, having entered all events save the 1X.  They are looking tan, fit and happy and it is nice to see them again after a long hiatus.

As for racing, the Princess Grace Challenge Cup for the Womens’ 4X begins tomorrow (time TBD) and we have drawn China for our first round of racing.  We don’t know which Chinese crew has come to Henley (two boats are entered in Lucerne next week) but we are anticipating a very good race from them regardless.  Three of the women in my boat are new to Henley and watching them experience the sensory overload (which… as it’s only Thursday, has only really just begun) has been great.  Wide eyes, big smiles and general excitement all around.  The idea of racing in front of a full 2200m of spectators is new to them, and we are all very excited to head down the race course tomorrow.  If you’d like to listen live to the racing, you can check out the Henley Regatta Radio site: http://www.regattaradio.co.uk/listenlive.html

Of course, a topic of much discussion has been our outfits for if/when we are able to attend the Stewards Enclosure.  Many of my teammates who were not originally planning to wear hats or fascinators immediately caved after the first day at Henley and have gone out shopping for them.  Having the whole USA team in hats and dresses this weekend is going to be HOT!  I can’t wait to get some great photos of the Team rocking Henley fashions. 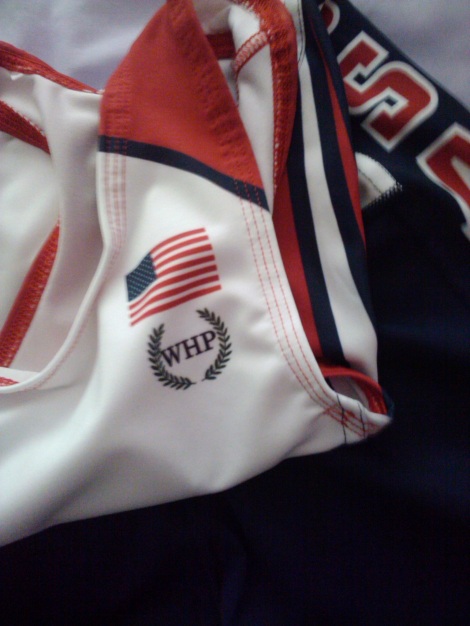 And of course, I wouldn’t want to forget a big part of our Henley trip this year, which is that one of Henley’s biggest supporters and American Henley Steward, W. Hart Perry is no longer with us to cheer on Team USA at the regatta.  He will, however, be in our hearts as we come down the course, wearing our special edition USA unis emblazoned with his monogram in his Memory.  I know how much Hart loved Henley, and I know he would have loved to have seen so many US National Team boats competing for trophies this weekend.  This one’s for you, Hart.

3 responses to “Cheers! From Henley”