It seems that I’ve been back in Princeton long enough to have written another update blog by now–but between pizza parties, henna parties, Mario Kart, housecleaning, training, working and everything else blogging has fallen by the wayside.  Part of the turnoff has been trying to relocate all of my paging and blogging onto a new site–Wordpress.com as you can see–as I’m inclined to give Google and Blogger the finger for having removed the very convenient, very free and very easy web publishing tools that I started off with back in 2008.  Since I am not a web publisher and since I don’t have bundles of cash to pay for a designer and/or web hosting services, I had to upgrade to a site that would allow me the freedom of having multiple pages within a single blog space, and which would still be accessible and easy to use.  So, I’m scooting my domain over here and leaving Blogger behind and will be transferring all of my backdated posts here eventually to make the transition complete. 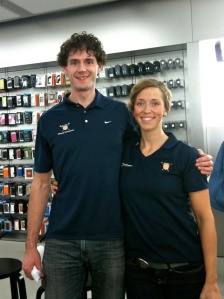 My last post was about an event at the Bridgewater, NJ Apple Store.  As it turned out, Josh Inman and I were the only athletes available for the event, so we played superstar for an evening and got to hang out with other Apple geeks who were in for an in-house workshop about sports photography.  The idea of including athletes in the event was to eventually (hopefully!) set up a series of recurring events at which attendees (Apple/Photo Geeks) will be encouraged to attend a workshop, and then attend rowing events in Princeton in order to practice their new workshop skills, and then return for a follow-up event at the Apple Store in order to share their work and progress.  This could mean a lot of things for an ongoing relationship between USRowing athletes and the folks up in Bridgewater, so I’m looking forward to where these ideas could go!  Josh and I signed some posters for some grateful and very surprised attendees; it was great to get out in to the community and let people know–“hey, you’ve got an Olympic team training in your back yard”.  It’s crazy to think that we live, work and train all around these people, and the majority of them don’t know we exist.  At any rate, it was a cool event, and the way I see it no time spent in an Apple Store is wasted (especially if you’ve got a brand new MacBook Pro like me).  I told the guys that I’d bring a flatbed truck with me the next time we arranged an event.
I’ve got a lot of ideas for posts bouncing around in my head regarding amateurism, funding, cross training, diet and weight control, and more… but there’s so much to write and so little time.  Especially with DVDs of It’s Always Sunny in Philadelphia in the house.  Sheesh.