It’s been a long day already, and it’s only 2:30 p.m. I left the 4401 this morning around 5:30 a.m. to be at Mercer for my 7:30 semifinal, and have been home for just about 30 minutes gorging myself on all forms of carbohydrates to recover from my long morning of racing and basking in the sun.

So far, NSR I has been full of fun and surprises, just like every race I end up in. I have had a bit of a slow start, coming in at position number 11 in the W1X time trial, and then qualifying for the semifinals in position 4 of 4. Today was a big test of my adaptability and willingness to try new things in my race plan in order to qualify for tomorrow’s A Final, and I am happy to say that I was successful. My semifinal had six tremendous racers who all had good pieces and who left everything on the course today in order to try to qualify. In the end, positions 2-6 were separated by just about 2 seconds with everyone putting up a great fight all the way down the course. Both Finals tomorrow should prove to be excellent.

Tidbits and trivia from around the race course…

Conditions at Mercer have been uncannily kind given that it is still April after all, and we are trying to have a regatta. NSR I is notorious for scoring some of the nastiest weather of the year in the great Garden State, so having three consecutive races here with fair-to-excellent water is a treat. We were somewhat concerned on Thursday evening during the Athlete Meeting when we were quickly disbanded by lightning strikes, horizontal rain, and three foot waves crashing against the breakers at Mercer. A JW8+ got caught in the fray and their boat turned perpendicular to the dock before they could land it, forcing the bow 4 to abandon ship and wade through the water to land after helping to straighten out their teammates. About 30 minutes later, the skies had completely cleared and the water was near glass. Ahh Mercer, how I love you and your completely unpredictable ways.

Only Mercer can go from this... 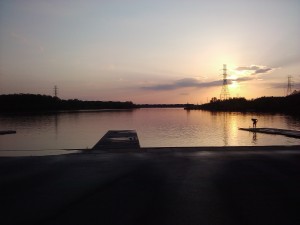 We had much of the same phenomenon last night for Heats. I warmed up in a nasty cross chop at the top of the lake and then suddenly as I was muttering swear words to myself and spinning my boat to turn, the water around me was completely calm. Granted, it was also night time and we were then racing by moonlight (our already delayed start time of 7:30 p.m. was pushed back at least 10-12 more minutes), but all of us were grateful for the break and for a chance to race in better water.

Not all were so lucky, however, and at least one friend in the earlier races took a swim in lovely Mercer Lake from lane 1. Probably not the best mojo for a selection regatta, but what can you do?

Today we continued with great conditions for our semis, and even the later races only had to deal with a little tail wind chop. It was sunny and beautiful enough to bring out a pair of Northern Water Snakes that were basking near the docks, each about four feet long. Truly a thrill for those of us loitering around the boathouse.

Mercer and her cruel, cruel tricks.

I can’t quite recall if the snakes came before or after some unfortunate male single sculler lost track of his single while attempting to get his oars…and it drifted away, much to the comedic delight of all landbound onlookers (I admit it, I laughed.  I’m a terrible person).  At least it floated to a nearby dock and he wasn’t forced to swim for it before launching for his race.

My only other thrill of the day came from meeting Matt Carey, one of the athletes from the M2X event, who was casually making his way through the cooldown area in the stroke seat of his double…with no bow man. As I rowed by (with an obvious look of bewilderment, no doubt), he flashed me a big smile and said, “Want a ride!?” Apparently the pollen content of the air was a bit too much for his partner this morning, and he was carted off by an official’s launch at the finish line, leaving Matt to… row his cooldown in the 2X by himself. Despite all that, he was all smiles and flirting with the ladies, so I take it there were no hard feelings between himself and his partner for his early departure.  Only at Mercer!

All in all, it’s been an interesting couple of days. I am happy and honestly–relieved–to be racing in the A Final tomorrow, after having some serious doubts about whether or not I would be able to find enough speed to be competitive at this regatta. But I think today’s race definitely gave me some things to think about in order to prepare to take on some very fast singles tomorrow.

Good luck to all of the Sunday finalists!